Here, we present a selection of winning entries and staff picks.  You can visit our online gallery to browse through other entries, or download a compilation of all entries with full descriptions in PDF format (part 1, part 2, part 3)

“Project “AF:CFFiIV” explores the process of imagination. It is based on the activity of three non-human agents – neural networks. The first network generates images of human faces. The second uses category recognition algorithms to create descriptions of these images. The third reproduces these descriptions with a trained voice.

Artificial neural networks (NNs) can resemble brain circuits. Our goal was to use NNs to imitate processes that happen in the brain to illustrate the process of perception and how perception is converted into an experience.

Imagination can be defined as the process of spontaneously occurring or premeditated abstract concepts, which are not directly perceived by the senses, but find their origin in the reassembly of information that we continuously sense around us.

NNs generate new images to replicate a humanlike experience based on a publicly available dataset (FFHQ-dataset). Here, it models reproductive and productive imagination, which is neither constrained with moral or aesthetic principles nor emotional bounds. According to David Hume, the unimaginable does not exist to us. NNs could help us to expand our own understanding of beauty and aesthetics as well as expand our aesthetic boundaries.”

“What can contemporary scientific research in Cognitive Science, technology and art tell us about our own cultural preoccupations in the twenty-first century (i.e. emotion perception and communication)?

ULTIMATE EMOJI is a performance and an installation that uses an artificially-generated Emoji sculpture to reflect on how digital “memes” shape our present cultural values and understandings of our emotions. The sculpture exhibited is first generated by an Artificial Intelligence (A.I. – Machine Learning), then 3D-printed in a large-scale format, and finally painted classically during a live- show by the artist.

The design and features of the ULTIMATE EMOJI are controlled by the data and metrics of people’s perceptions and emotions evoked by the specific urban space and location where the performance is currently taking place – Disseny Hub Barcelona for the Mobile World Congress 2019. In collaboration with The Social Dynamics team at Nokia Bell Labs Cambridge – UK (Aiello et al., 2016), this experimental aesthetics project uses innovative technology and recent scientific research on Computational Social Sciences to reflect on the impact of digital transformation in our society.

A generative ambient music set, which is live-ensembled by the artist, creates a soundscape that gives context to the piece. The musical piece is also created using A.I. techniques and with a collection of sounds sampled from famous digital “memes”. Style, rhythm and scale depend on the movements of the artist during the performance, conditioning how the piece will sound like. ULTIMATE EMOJI is a cultural and artistic experience where the digital relationship and interactions between a human community and its environment is adaptive, coherent and in harmony.”

Multiphoton microscopy image of a human brain bridging vein, in which second harmonics are used to image collagen fibres. Bridging veins drain the blood from the cerebral cortex into dural sinuses by puncturing through the dura mater. The shape of a horse within the image and is a reminder that biological material are never boring.

The image was taken on a Zeiss LSM780 microscope with an objective 25x coupled to a MaiTai DS pulsed laser (@ 850 nm) to generate second harmonics from collagen and elicit auto-fluorescence. Signals were captured in forward and backward direction on BIG detectors and stored as four colour Z-stacks. A large area of the bridging vein was scanned and the Z-stacks were stitched together using a Zeiss stitching module.

Prior to the calculation of the local orientations, acquired Z-stacks were denoised and enhanced to highlight fibrillar structures from the background. Then, for each Z-plane of the stack, the ImageJ plugin OrientationJ was used to extract the local 2D orientations of the fibres based on structure tensors.

“Starlight Gone” is an interactive installation about depression that emerged from an art-science collaboration formed under the Convergence Initiative. This piece was exhibited in the Black Box of Concordia University from 18th to 28th April. Starlight Gone portrays how loss can initiate a union that protects against future loss. We constructed metal wire sculptures that are that are to-scale replicas of astrocytes found in the human prefrontal cortex. The flame in the soma of the largest astrocyte structure grows larger as viewers approach it, indicating that the expression of depression is often the loss of human contact.

My structure of interest are perineuronal nets (PNNs) known for controlling neuronal plasticity. I am investigating its ulstrastructure and wanted to create a wire mesh, that could be touched and thereby better understood. The mesh was a way to depict the richness of PNNs  in function and structure. I used flowers to represent the beauty of a neuronal architecture, as I imagine it.

The electroluminescent wire resembles the communication between the astrocytes, which has recently been shown to be decreased in depression. Each flicker of the LED flame in the large astrocyte symbolizes gene expression changes, which will result in different messages being sent from the astrocyte to the cells around it. The layered soundscape resembles how human relationships relate to a more diverse sense of belonging. This piece is made to remind viewers that even their silent presence can aid the psychological well-being of their peers. More information can be found here. 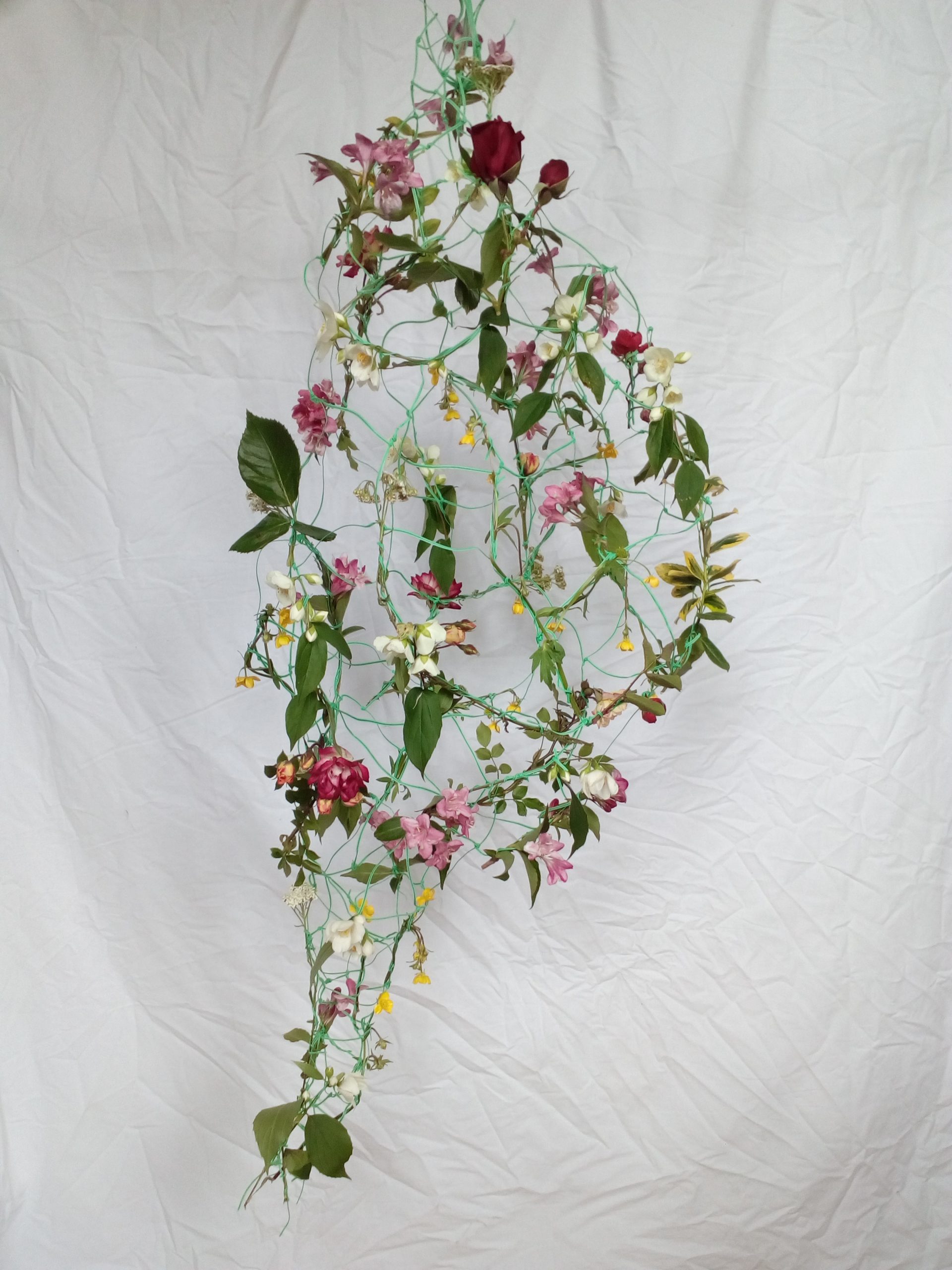 The staff of AoN 2019 has selected a few of their favorite works below. 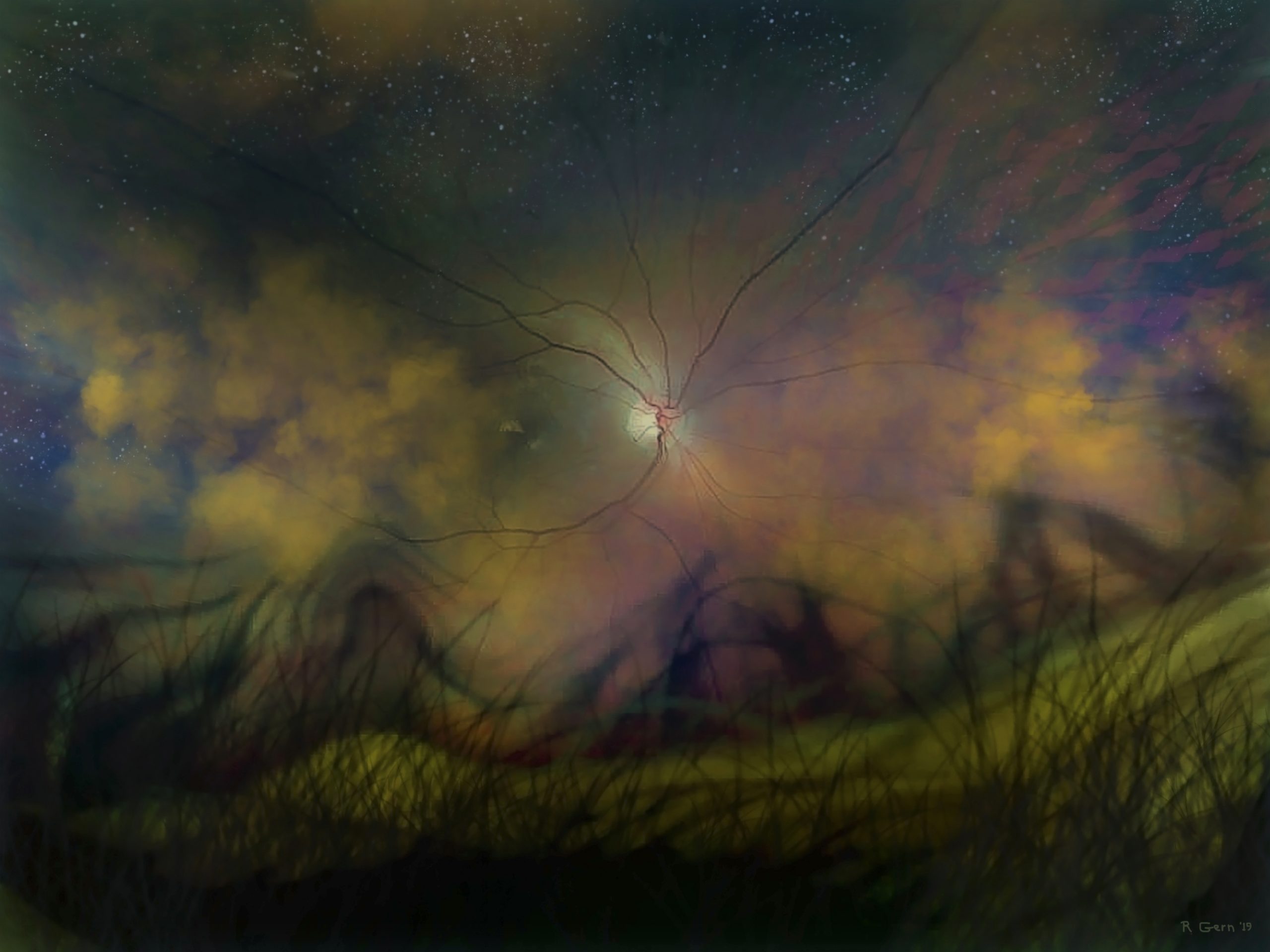 Light and our visual perception of the world, with its overlap of physics and neuroscience, fascinate me. In this drawing I have attempted to trace the path of light waves/particles entering the eye through the lens and the several layers of the retina, which are then transmitted as sensory nerve impulses to the visual cortex to be processed. The circular arrangement or the mandala, with its six divisions represents the optical systems of six people perceiving the light appearing from the center of the mandala. 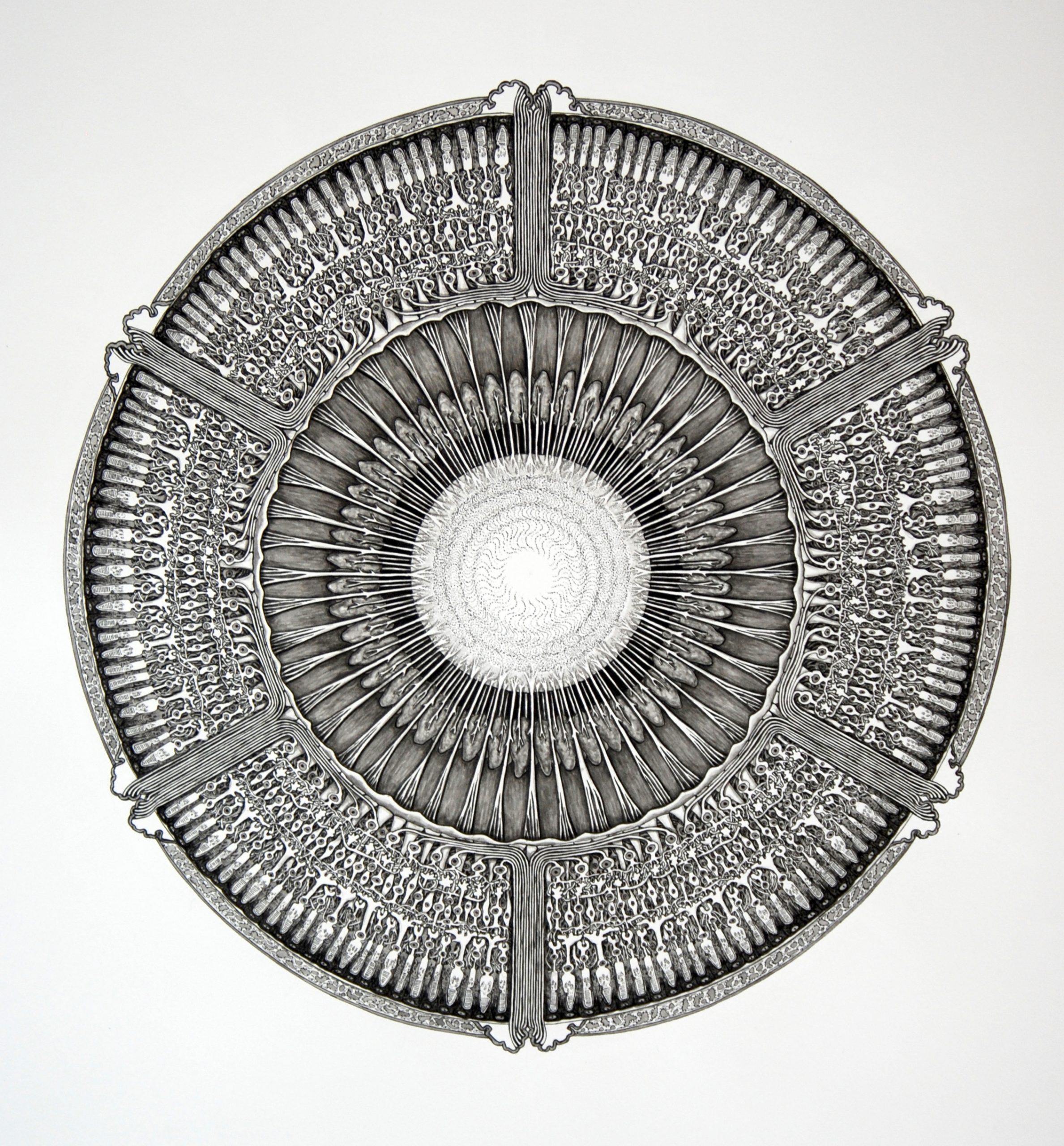 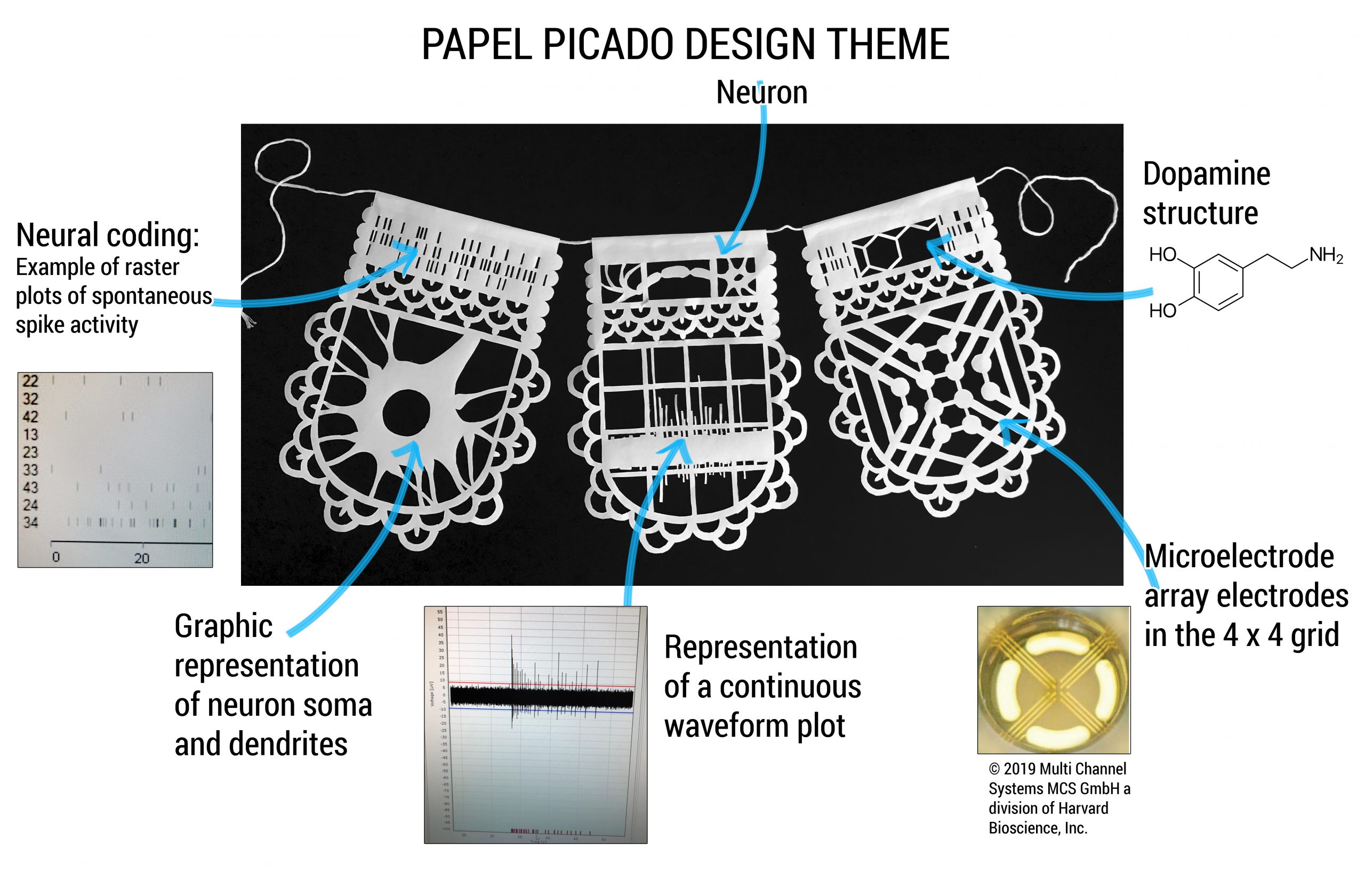 The Papel picado [perforated paper or pecked paper] is a traditional Mexican folk art and a decorative craft made by cutting very elaborated designs into sheets of silk paper. The designs are commonly cut from colored silk paper using a template, a mallet and chisels. The most common themes include flowers, birds and skeletons.

Originally, the papel picado is incorporated into altars [ofrendas] during the Day of the Dead but it can be used in other holidays. The present Papel picado represent the use of microelectrode array (MEA) in the recording, evaluation and analysis of potential actions propagated by dopaminergic neurons in culture. MEA are devices composed of multiple microelectrodes arranged in a grid. The neural signals are obtained by microelectrodes, which serve as neural interfaces connecting neurons to an electronic circuit. During the recording experiments, MEA is connected to an amplifier and a computer. The changes in voltage over time are detected by microelectrodes and shown as a continuous waveform plot.

Using a specialized software, potential actions [spikes] are detected and displayed as a spike raster plot, which represent the spiking activity of a group of neurons in an specific period. All these elements of the MEA technology were represented using the traditional Papel picado technique in three different designs, which were cut by hand using a X-acto knife. The aim of using Papel picado to represent this electrophysiology approach, was to share my passion for neuroscience, art as well the Mexican traditional culture.

“Any man could, if he were so inclined, be the sculptor of his own brain.”  – Santiago Ramón y Cajal.

Viewed from a distance, these minimal sculptural box act as landmarks with a theatrical atmosphere. In close proximity, through the illusion of an infinite reflection and the metallic neurons it recreates a tridimensional neuronal forest. It opens a metaphysical window to the anatomy of our brain in a cellular level. And in the collective imaginary, the piece contributes to sharing the fundamental principles of neuroscience to the general public.” 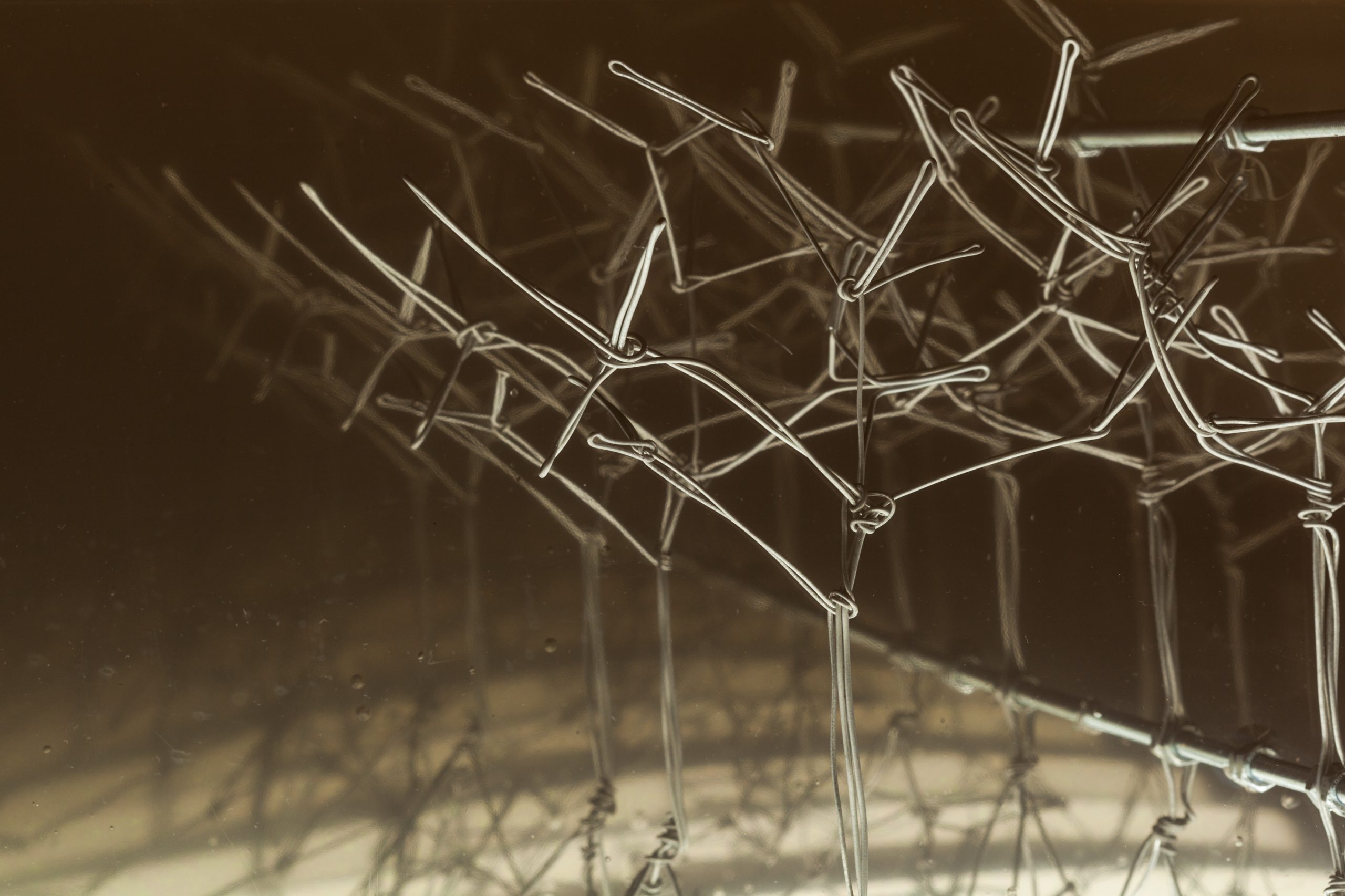 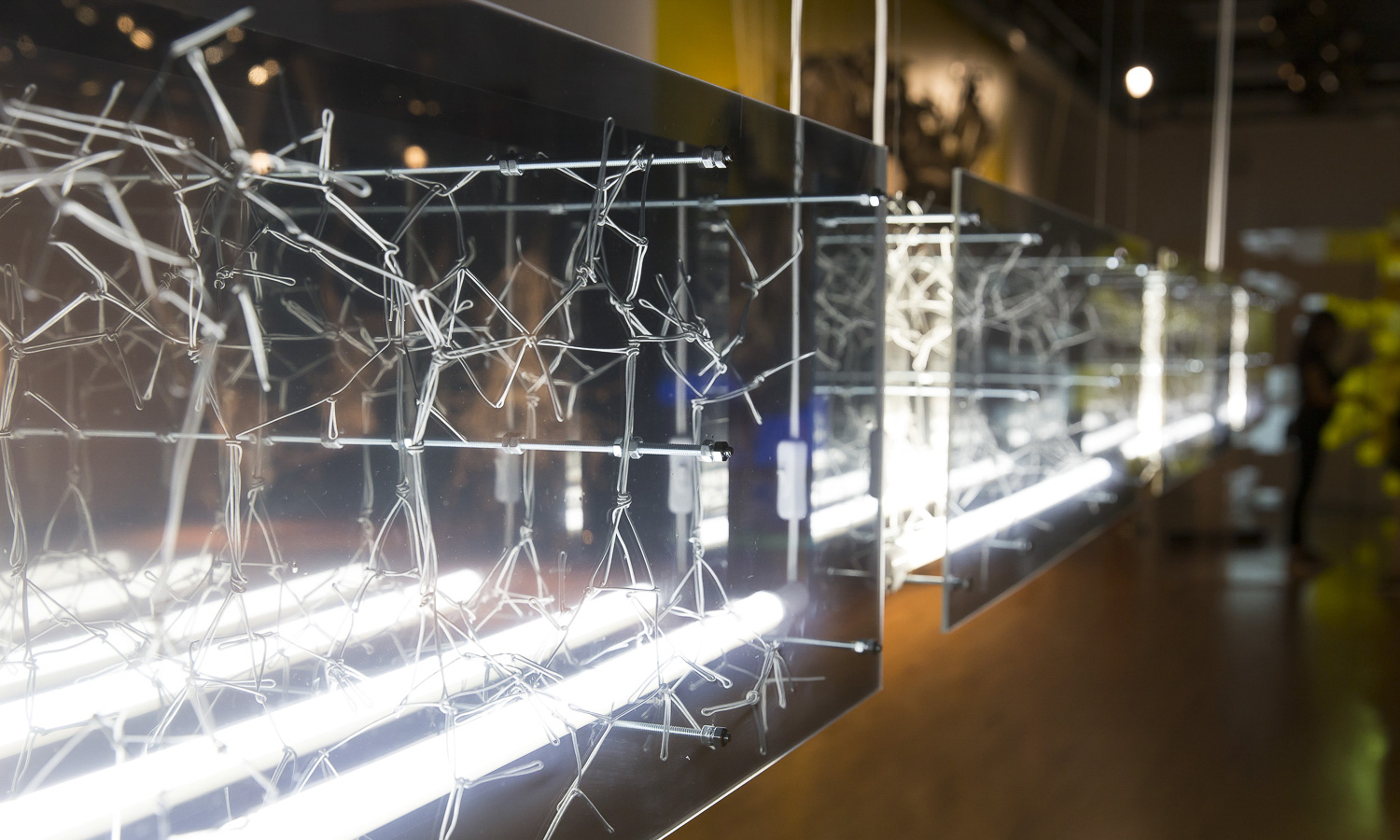 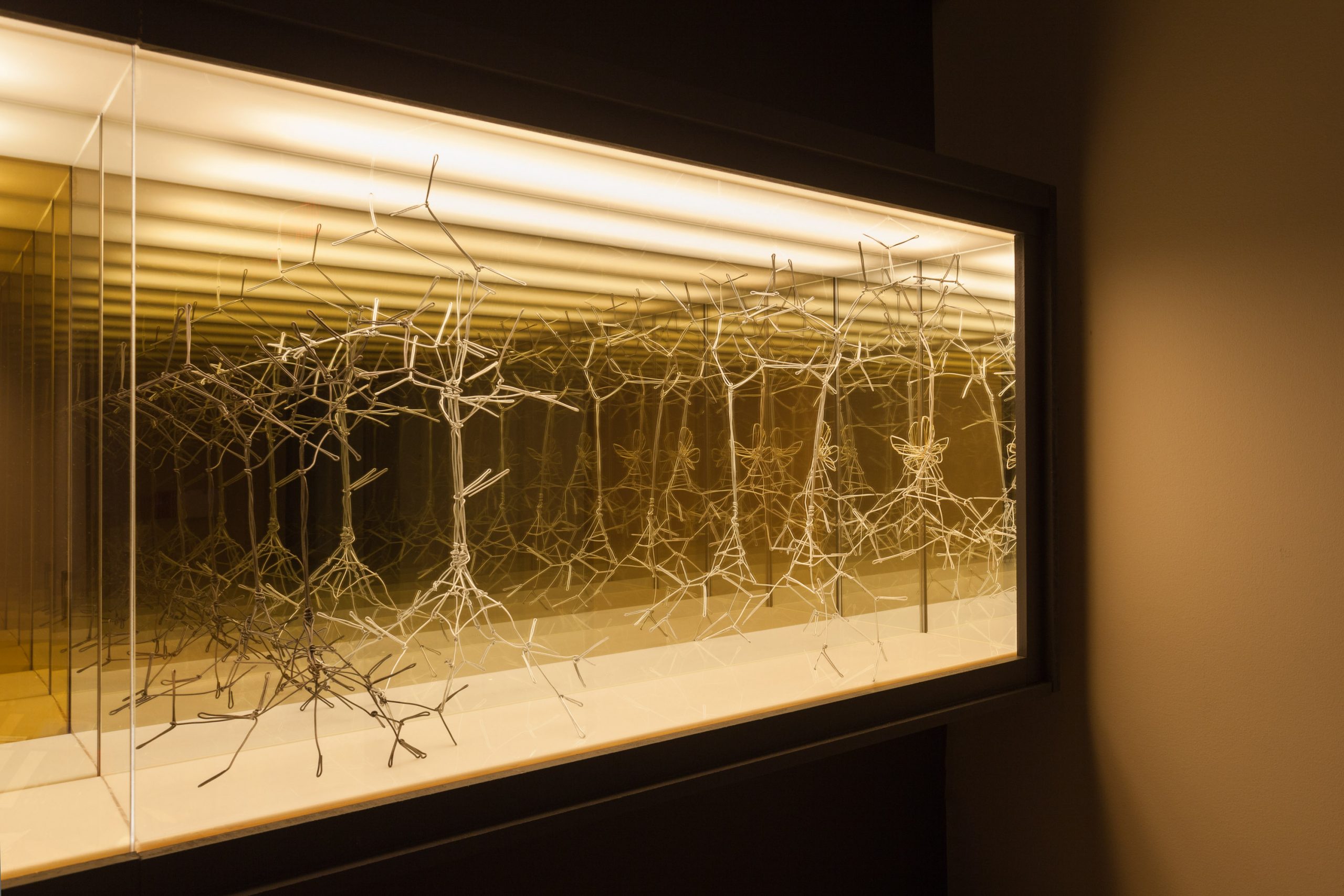 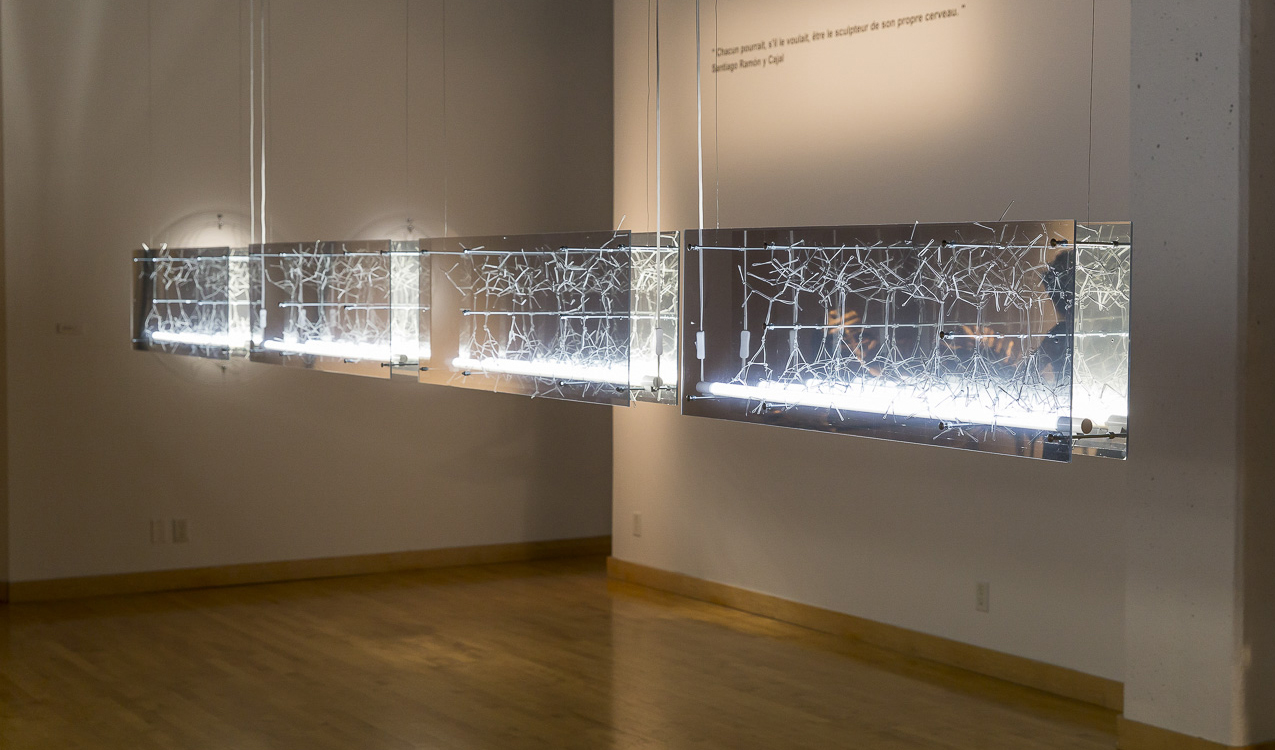 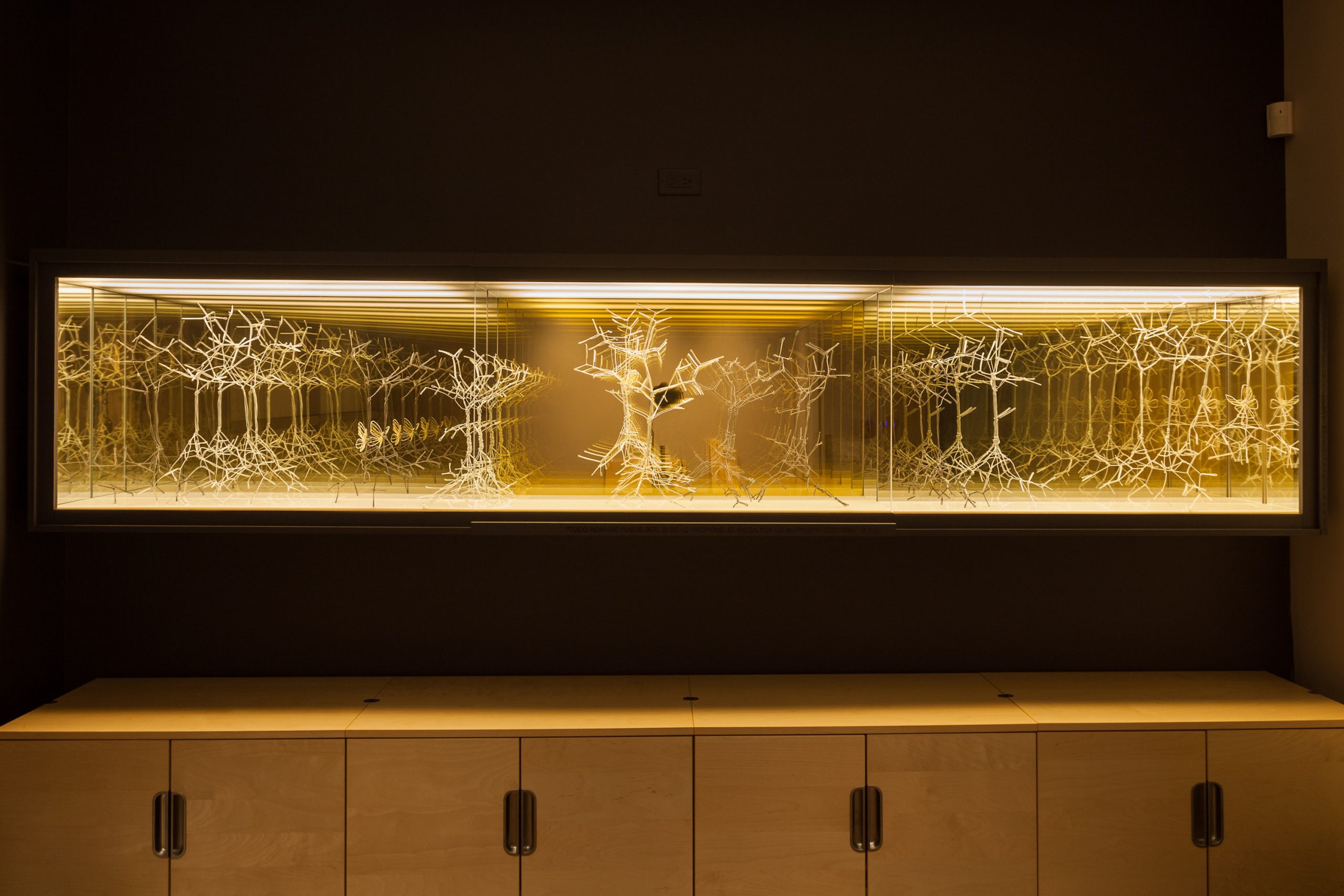 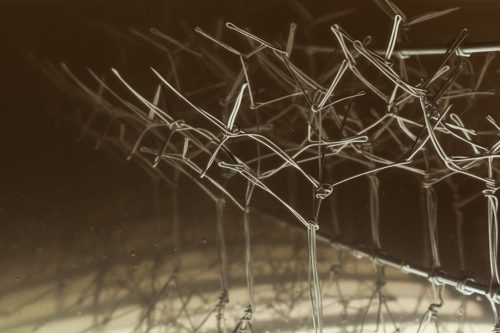 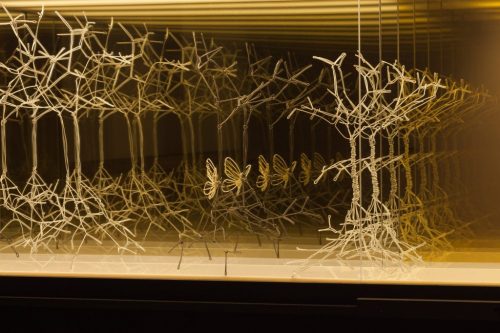 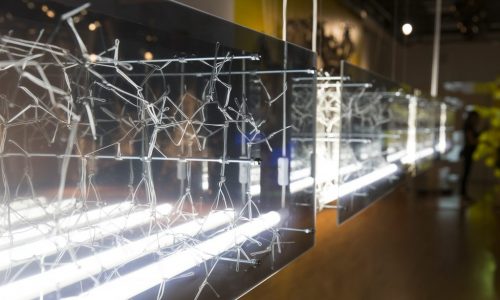 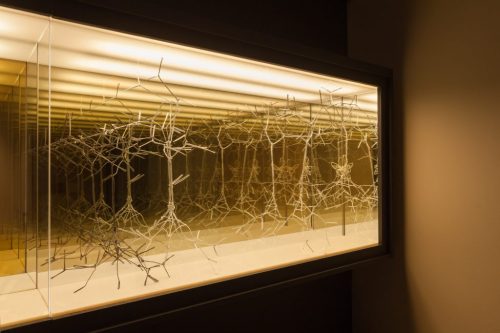 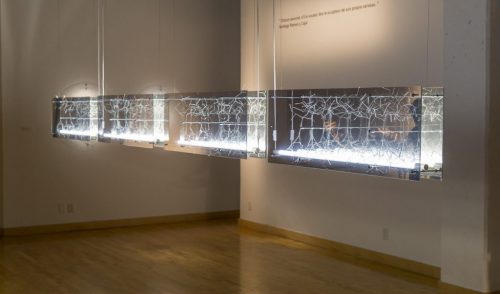 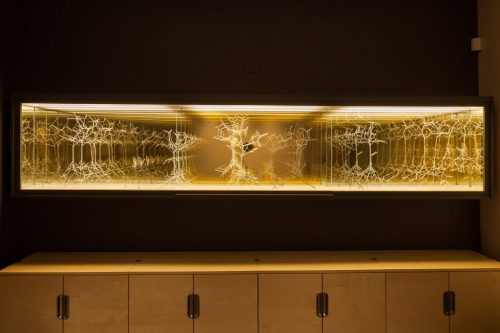 An exploration into the boundaries of space: volume, surface and line; of the immaterial form and its perception – its structure and deconstruction. A deep look at the human body, its anatomy and the appropriation of its symbols.
With the influence of the old masters and the early works of Alexander Calder, to current digital 3D media and architectural representation, these tridimensional hybrids bring together drawing, architecture and sculpture in order to create a coherent spatial entity.
Floating tridimensional sketches of the human body are drawn through space with different sheathes of galvanized wire mesh and are assembled and structured with architectural detail.
Spatial sketching allows for the possibility of new representations of images in space, exploring the void and the dematerialization of volume. The physical and metaphysical presence of the human body emanate through a combination of transparent planes and spatial lines.

This painting is a depiction of neurons making connections, flourishing in hope and reclaiming an area previously void and dark with ornate branches of activity and light. My desire to better grasp my daughter’s rare genetic disorder led me to explore neurons and neuro-genesis and create art in response. I never expected to become so intrigued by the complexity and beauty of the human brain. My inspiration comes from the hope found in its ability to re-circuit around inflicted damage and how our thoughts and responses influence that process.